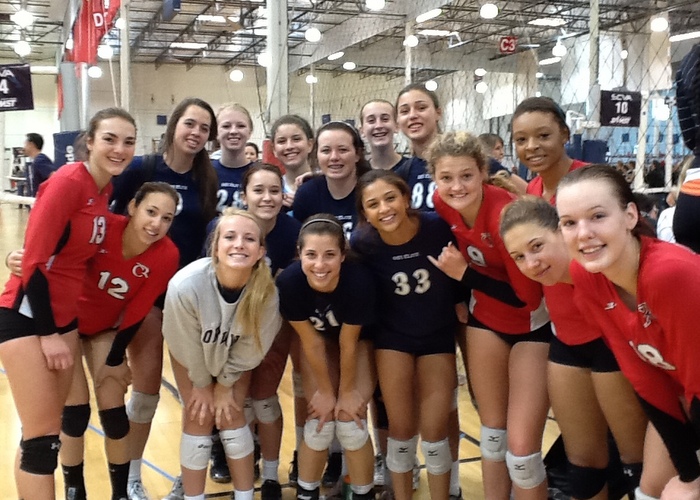 951 Elite's 18-1 Phiten Team is the team that all the young players at 951 Elite aspire to someday play on. Being on that team comes a huge responsibility to be an example of how an elite athlete should conduct themselves, even in the heat of competition. Once you get to this level, you are expected to compete at the highest level, always pressing on to win matches. This year at the Southern California Junior National Qualifier, the 18-1 team had a tough first match to play against Club Red 18-Brian. The match was very close and competitive. In the middle of the first game, the Libero for Club Red sustained a tournament ending injury. The match continued on and 951 Elite came out on top. Later that day, players on 951's team found out that the Libero, Lindy had gone to hospital where she was diagnosed with a concussion and that she would not be able to play the rest of the tournament. Our players felt so bad for Lindy so they decided to do something for Lindy. With some help from our team mom, Leah Wiltgen, the team went out and got Lindy a little gift and get well card to make her feel better. The next day, Lexi Dempsey, Tyler Davis and few more of our players located Lindy and gave her her gift and get well card. Lindy was very surprised and it brought tears to her's and our players eyes. Our goal at 951 Elite is to develop our players to become not only great volleyball players, but to become incredible young ladies. The act of kindness that our players showed Lindy makes all of us at 951 Elite so proud them. All the up and coming young players at 951 Elite should look up to these players and aspire to be like them. At the end of the day, volleyball is still just a game! Love playing the game, but don't loose focus of the big picture!! We are so proud of our girls!!! Below is a picture of our 18-1 Team and their new friends at Club Red. Also attached is a letter written to 951 Elite from Mark Dyer (Lindy's Father):

Dennis, I must introduce myself to you and your wonderful team. My daughter Lindy hurt herself and sustained a concussion in the first match of the tournament (Friday). She was quickly taken to the hospital and later released being told that she would not be playing the rest of the tournament and maybe quite a bit longer depending on how long her symptoms would last. As you can imagine this was very tough on Lindy and many of her good friends on the team. Although she wasn't able to make it back that day to watch, she was able to come the next morning. Prior to their first match, a few of your girls and others from your team showed one of the classiest moves I have ever witnessed. Handing Lindy a nice gift and a card signed by the whole team was amazing. It brought tears to Lindy's eyes and impressed every parent and team member at our club. The fact that your team was reffing that match and showed this type of kindness was beyond any expectations. Lindy has played club now for 7 years and during that time, I have heard many good things about 951 Elite. I have to admit though now that we are more impressed with 951 Elite than ever. The leadership you have shown as the owner/director has clearly trickled down to the fantastic young ladies on your team. Some of the comments on the card were so appreciated by Lindy; including the prayers and well wishes. I only hope that the clubs in Arizona show the same kind of respect to other teams as you have shown. We did take Lindy back to Phoenix tonight so she could rest her head as she gets too excited when she is watching her team as we saw today. I did notice that we may be playing each other tomorrow and wish I was there to thank you in person. In the meantime, I told the CEO of Court One, where Club Red and a few other clubs practice of what your team did for Lindy. His name is Mitch Brown. He told me that if 951 Elite ever comes to Phoenix and needs a place to practice, play or anything, that Court One would be your home. Thanks much from the Dyer family!

"Thank You!" - August 5, 2016
I just wanted to take a moment to say "Thank you" to you and the entire staff at 951 for helping to prepare my daughter, Jillian, for her high school tryout.  She left softball a little over a year ago...(a sport that she played since she was 4 years old, played at the club level and was very good at) and wanted to try volleyball.  She was so nervous and thought it was "too late in life" to start a new sport!  951 not only welcomed her with open arms, but worked with her to build confidence and skill!   Dennis, you took the time to recognize her at the last EVA she was able to attend before HS camp started and she took that with her for sure!  I am excited to say hard worked paid off and she made the JV team at MVHS!

You do an amazing job in selecting your coach staff and we are very proud to be a part of the 951 family! Looking forward to many more years with 951!